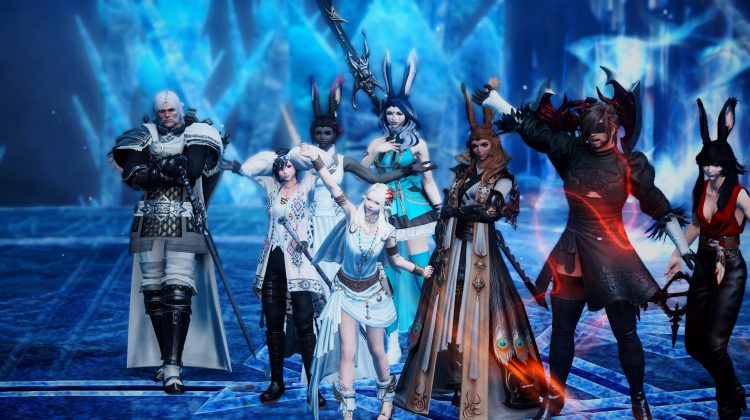 This tier has been an interesting one for the Astral Team with some members needing to leave mid tier, for some teams this would be the end but not for Astral. We kept on going and found amazing new friends to be a part of the Astral static family.
With the new team formed we did our reclears and started the hardest fight together, E8S AKA Ice Loli. Going in we had two members who had cleared and Hik’s had studied the first part of the fight, making many notes ready to shot call. The first pull happened and most of us died what felt like immediately, would this dampen our spirits? Never! After some explanations from Gen and attempts we made it quickly to the dreaded PANTS, the mechanic to murder us over and over again, as well as makign us dispute if the chains were making a box or a square (we are still yet to reach an agreement). After some head smashing we got there though and made it to adds, which only a few of us knew how to do, Rog put it perfectly when the transition scene happened ‘I don’t know what I’m doing here.’ Words had never resonated so much with us.
Then we had a rest with a cutscene, giggling and joking before we got the message from Gen to ‘focus pup’.

Next on the to get right list was Wyms Lament, it has numbers, fuck numbers, why we gotta read numbers mid fight?! That’s all on that one, we smashed it very quickly.
After that the fight was relatively smooth sailing with learning mechanics quickly and constantly getting past Wyms Lament, we could feel the clear was close…

We got to enrage and had a few percent left, though we knew the next one would be the one.
Pots at the ready we early pulled, as usual. Getting to Ice Lit we knew we should hit the dps check even with a death earlier, we got to enrage…. and  wiped at 0.01%! Multiple swear words followed that and we realised Gen would have got a 100 parcential parce, many hugs were sent his way. However we knew we could do it and the next night we did, after a pulls we put Shiva in her place, dead and on the floor. Many “happy” noises followed, including a BORK from Raisin’s dog.
We had done it, we had killed her together as a team.
Astral is an amazing team filled with fun people.

Here are some words from the members of Astral:

Clearing this tier was a great achievement for myself, but clearing it with Astral was even better, a collective group effort to nail Chad Thundercock, Rakta-Pasta, Attack of the Killer Origami, and the Ice-loli. I’m excited to run the next tier and nail the next group of Fantastic Four And a big shout out to Genesis (AKA Ghen Gen AKA Gennifer AKA Paladin Main) for helping me to improve my tanking significantly <3, and also for for Raisin and Hik’s on healing me regardless on whether or not i say “I’ll heal myself”.

In all my years of xiv, this is my first time clearing a full raid tier with a static and I honestly could not have asked for a better group of people to achieve this with. The passion and determination with which we approached the last fight was heartwarming to see. Proud to be part of this team family!

I started playing XIV about a year ago now, and Hiks finally stepped foot in a savage raid around about when 5.1 dropped. After getting my first taste of savage raiding glory taking down Eden Prime I knew that finding the right static was all that was standing between Hiks and her dreams of becoming the very best healer … okay scholar in the world … or Europe …. okay, even just this FC. Did I say best? I meant top 10! Shot calling for Shiva is such a fun experience, I just feel sorry for the rest of the poor static who have to put up with my voice non stop for the whole 14 minutes the fight lasts! Astral is home to some of the most knowledgeable and talented XIV players I’ve ever met, and I’m very excited to see what we can do going forward, and even into 5.4!

I’ve gone through multiple job changes this tier which has been fun D: but I’ve also met a lot of fun and wonderful people who I get to enjoy the game with <3 also can we agree that having a big boss with no flank or rear is bad design, I play melee for a reason damn it!

Over this tier I’ve had a lot of personal skill improvement and a small confidence boost. After a strong start the static hit a rough patch with members leaving due to irl stuff, and I wasn’t sure if we would find people to join us and finish to tier, who would fit in with us. However we found two people who made learning and clearing Shiva an amazing time with everyone, fitting in and joking around like they had always been there. I couldn’t have wished for a better fun time with everyone. Shiva was very hard and honestly fuck reading numbers mid fight! But for the first time I got to fully clear a tier and now I get to go back and finish last tier with Astral, which makes me incredibly happy.

This tier was okay. Happy that we have cleared it as a static. Shiva was fun, but I liked Titan more. Playing DPS and clicking is hard btw T_T

It felt overwhelmingly difficult but if not that I’d never meet such an amazing team.

I first started out with this group of lunatics after I had just cleared E7S, they accepted me as one of their own after I joined and we cleared E7S quickly together and moved onto progression for the ice loli. I had so much fun with them clearing and progressing, the 0.1% wipe with Gens top 100 (sorry we love you) and then finally the next time we went in clearing it! I even got the mount and now can ride a flying thunder zebra! I can’t wait to get into the next tier of fights again with you guys!